As much as I love advanced planning I do admit that occasional spontaneity can turn into one heck of an adventure. This was the case last weekend, when Mr. B and I ventured out to Tokyo with no definitely plans. However, we ended up perusing the streets of my favorite neighborhood Omotesando, having one of the most scrumptious tonkatsu in the city (review coming soon), touring Marunochi a bit and browsing the isles of Character Street and Okashi Land in Tokyo Station. When we were done it was time for dinner and since we fancied something more sophisticated, Mr. B decided to improvise and made an executive decision to hit one of the most well-known luxury hotels in the city – Park Hyatt Tokyo located in Shinjuku district. Sweet, who would say no to that?!

Ever since I watched Lost in Translation I had a huge desire to have a peek inside the hyped hotel. We chose to dine at Girandole, a French brasserie style restaurant located on the 41st floor. They were kind enough to accommodate us without advanced reservation.

The restaurant is set in an open space which almost looks like a big dining hall. Huge black and white photographs adorn the walls while white table cloths add a sense of elegance and refinement.

As always, we opted for the tasting menu Le Menu Degustation – a selection of five classic French courses. While the first course was being prepped we were served some freshly baked mini baguettes accompanied with butter and a baked garlic, which we were instructed to smear onto the bread.

Soon, the first appetizer arrived. A delicate cauliflower and cod fish brandade served as a bedding for marinated scallop sashimi, uncured ham and mixed lettuce leaves, while cauliflower mousse was dotted around the plate. I really liked how light and refreshing the salad was. Flavors from fish and ham paired really nicely and the slightly chunky pieces of cauliflower in the puree as well as the lettuce leaves provided a satisfying crunch.

Next, we were served the soup of the day which was Cream of Corn. It was incredibly aromatic, luscious and buttery. However, we both felt that the soup was a tad too sweet and added a pinch of salt which balanced out the sweetness and turned it into a truly lip-smacking dish.

For our third course we had a pan seared turbot fillet accompanied with porcini ravioli, celeriac puree and a delightful truffle jus. It was further garnished with truffle and porcini mushrooms. 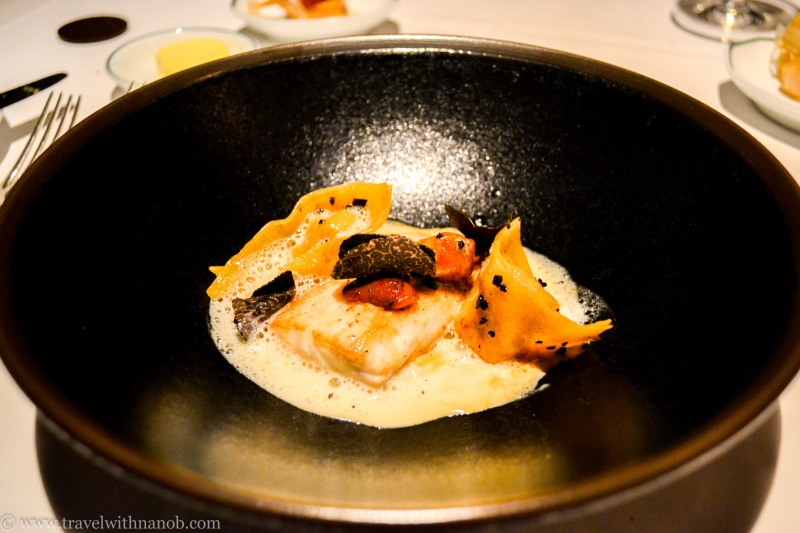 We were overtaken by the earthy fragrance of the mushrooms. Fish was cooked to perfection having that flaky melt-in-your-mouth texture and was complimented so well by the delightful savory and silky smooth sauce. Ravioli, generously covered in charred butter, although tasty did not strike me as particularly spectacular. I must say Dominique Bouchet set the bar high for me in the ravioli department during our recent fabulous dinner at his restaurant. Overall though, it was a truly delectable course.

Main course followed next. We both opted for grilled New Zealand beef sirloin topped with foie gras, green beans and a fresh salad leaves. On the side it was accompanied by mashed potatoes and horseradish sauce. Steak was cooked perfectly medium rare with its appetizing griddle char marks and was full-on with flavor. Beautifully seared creamy foie gras and succulent steak must be one of my favorite combinations and I am glad I was not disappointed at Girandole’s take on it. Sadly, both Mr. B and I left the mashed potatoes almost untouched because it felt too heavy and dense with no particular flavor.

Last but certainly not least, it was time for some dessert and cappuccino.  We were served a decadent strawberry sour cream daquoise garnished with fresh strawberries and mint leaves. Not only was it plated beautifully, but it also tasted absolutely heavenly. Daquoise had a delicate yet crunchy texture and was filled with sour cream, fresh strawberry jam and little chunks of strawberries. Every bite was packed with flavor making it an unforgettable dessert.

Not quite ready to go home, Mr B and I decided to continue our lovely soiree over some cocktails at the Peak Lounge located on the same floor.

The atmosphere here was buzzy, the drinks were delicious and most importantly, the view of nighttime Tokyo was mesmerizing.

Overall, while we did enjoy our dinner and the service was quite polished I classify this restaurant somewhere in the middle tier where it didn’t disappoint, but also didn’t quite stood out and makes me want to go back. This wouldn’t be my first choice to recommend to anyone visiting Tokyo for a short trip, but for those who live here it definitely would add a good variety to your epicurean repertoire.