I got off at Koenji Station an hour before sunset. As you step outside, the neighborhood captures your senses with colorful billboards, and narrow alleyways dotted with boutiques, thrift shops and yakitori. Not wanting to waste the onset of magic hour, I set to wander in the backstreets and soak in the distinct character of the neighborhood. Japan is a real photographer’s dream. Every turn you make transports you to a new world filled with perplexing and jarring juxtapositions and layered aesthetics. You don’t have to look far for inspiration because magic awaits at every nook and cranny. You just have to go beyond the usual beaten track and let your feet guide you to random alleyways. My stroll led me to dormant and seemingly unassuming residential area, and just when I thought there was nothing to explore here, I saw three grande torii gates leading the way – over a little bridge and through the shaded pathways lined up with vermilion lanterns – towards a cozy shrine grounds. The glorious light of the approaching sunset dressed the grounds in warm hues, bringing out the best in the details of the shrine. There was hardly a soul around which added extra layer of serenity.

Out of the three torii gates, it’s the stone one that stands out with striking carvings of dragons on each side called soryu, or paired dragons. I later found out that this gate is one of the Three Dragon Gates of Tokyo. One dragon is climbing while the other is descending. It’s believed that if you make a wish while touching the rising dragon, it will deliver your wish to heaven to be granted. The tricky part is figuring out which one is which.

Further down the pathway you see two kitsune (foxes), standing at the guard of the shrine. You might remember my two visits to Fushimi Inari Shrine in Kyoto, which is the head shrine venerating Inari – the Japanese kami (deity or spirit) of foxes, fertility, rice, tea and sake, of agriculture and industry, and of general prosperity and worldly success. The kitsune statues typically come in pairs, representing a male and a female, hold a symbolic item in their mouths and are adorned with red yodarekake (votive bibs) by worshipers out of respect. Offerings of rice, sake, and other food are given at the shrine to appease and please these kitsune messengers, who are then expected to plead with Inari on the worshiper’s behalf.

The shrine also features temizuya (hand washing basic where you purify yourself before entering the shrine), with a sprout coming out of a large blue rock. 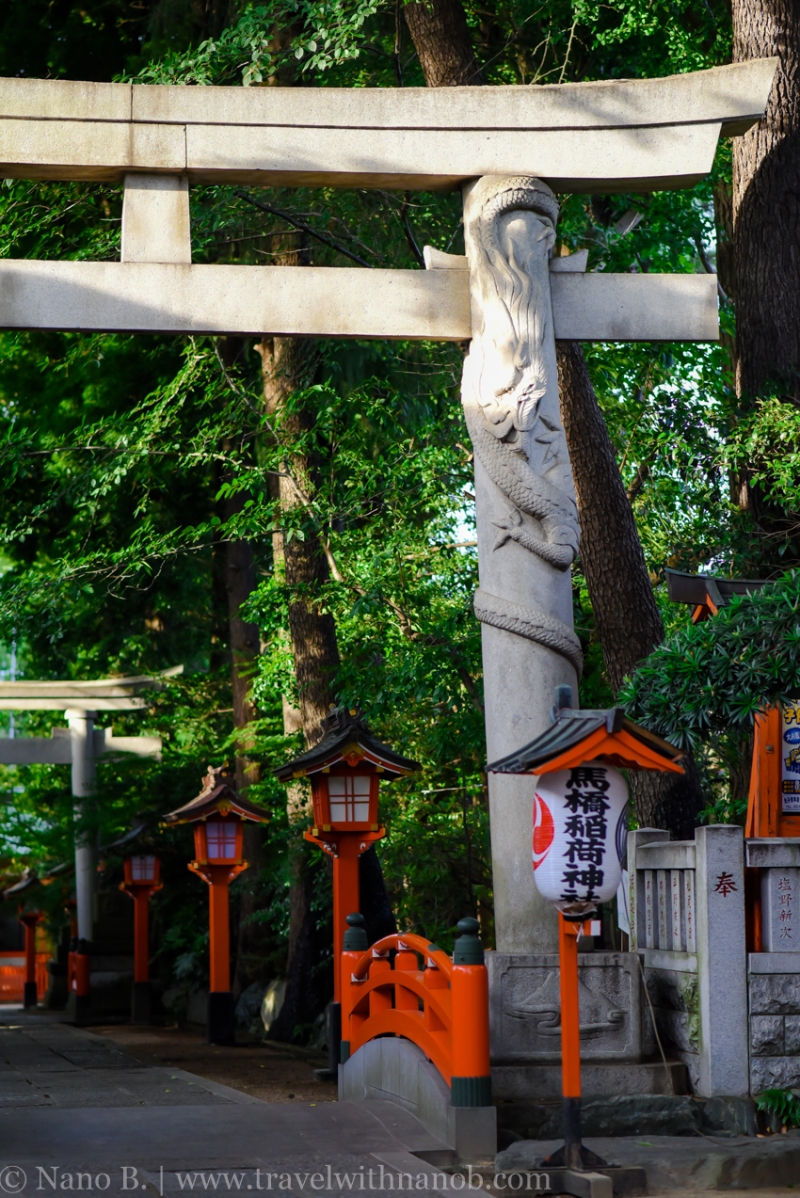 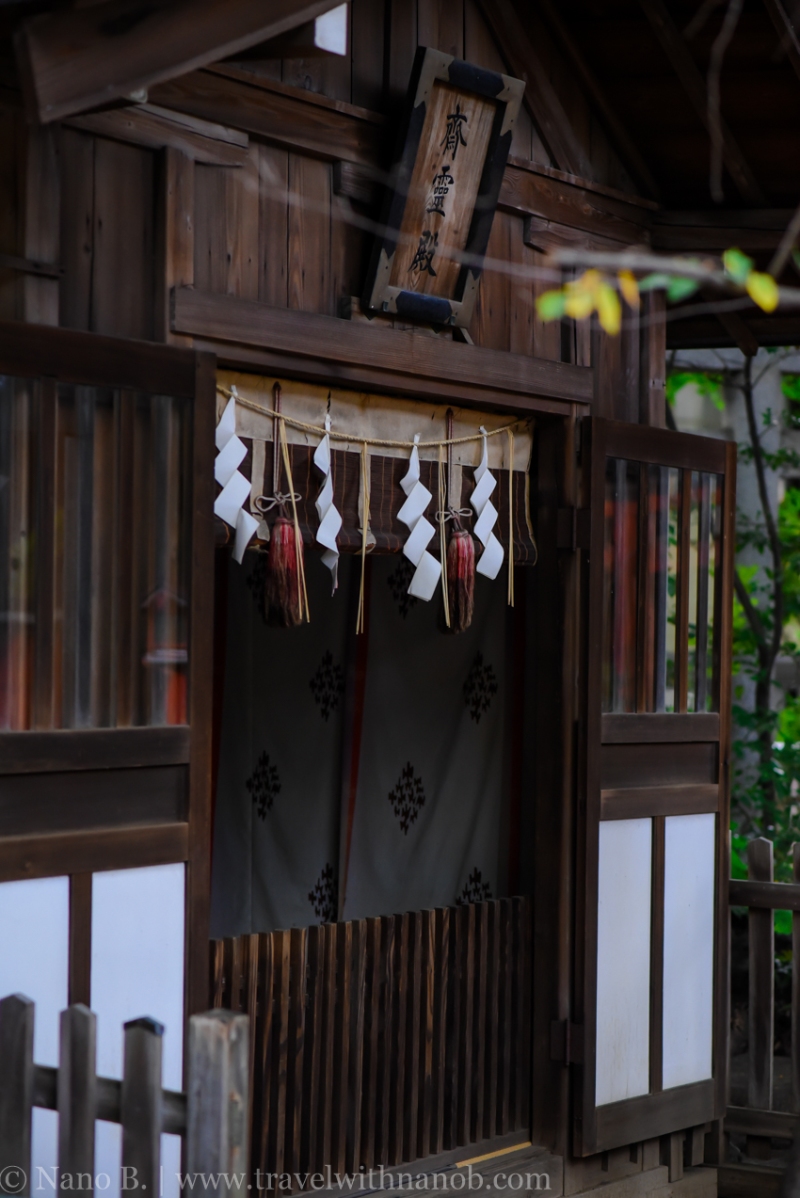 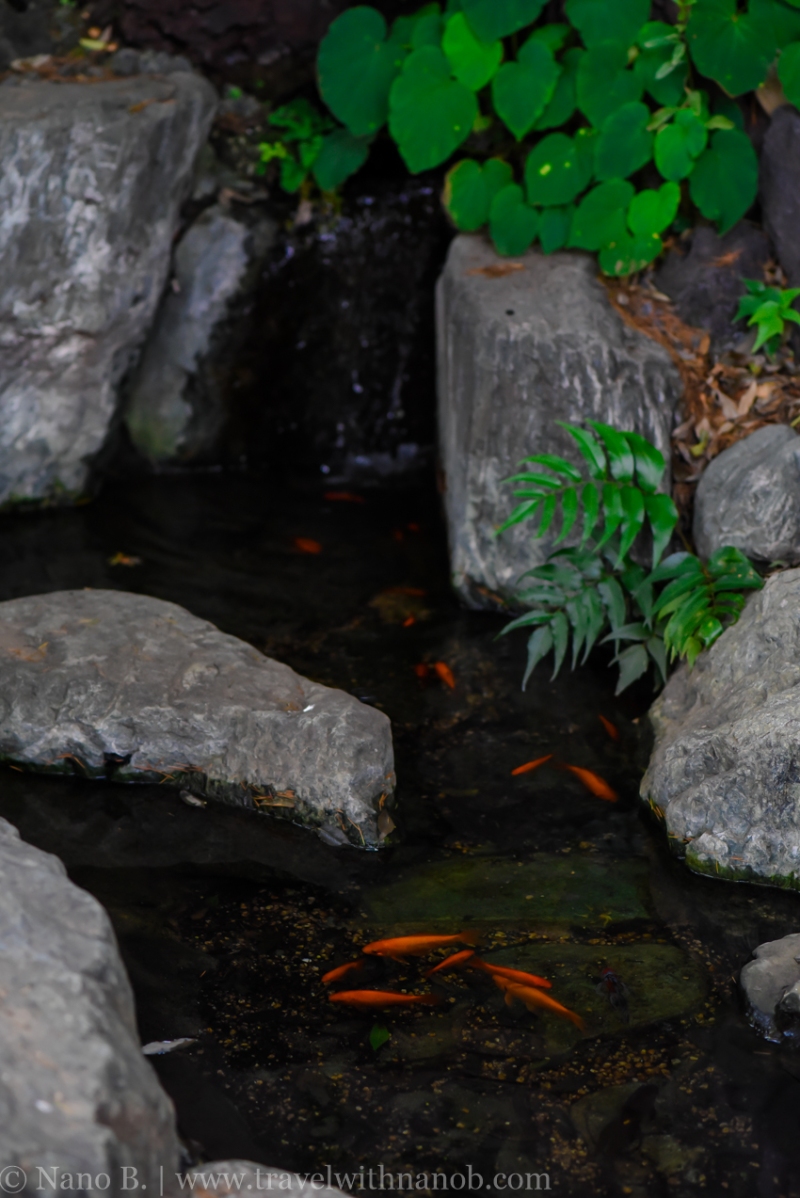 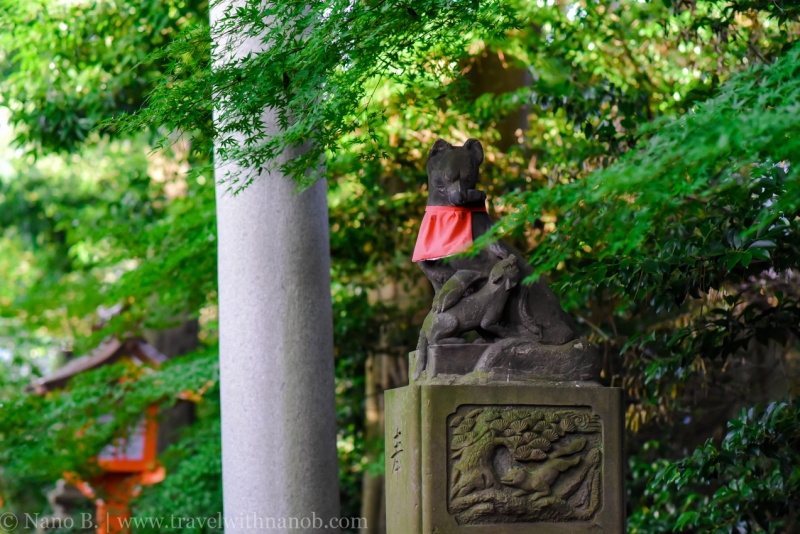 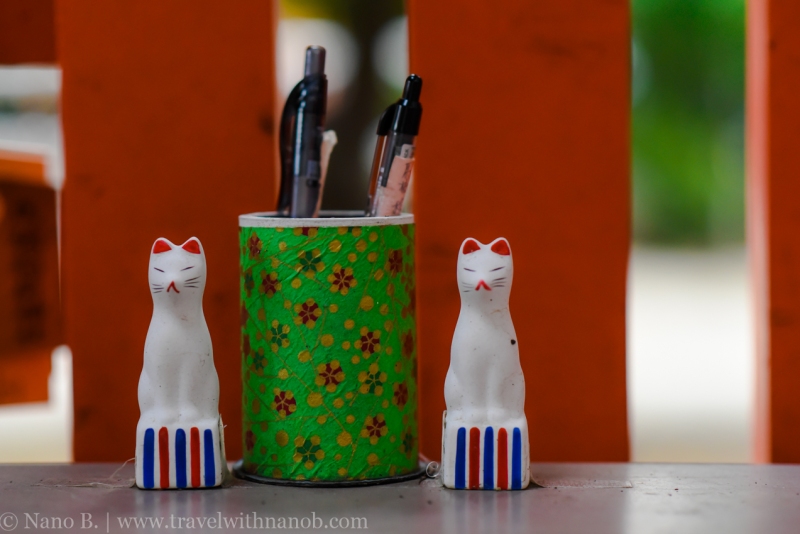 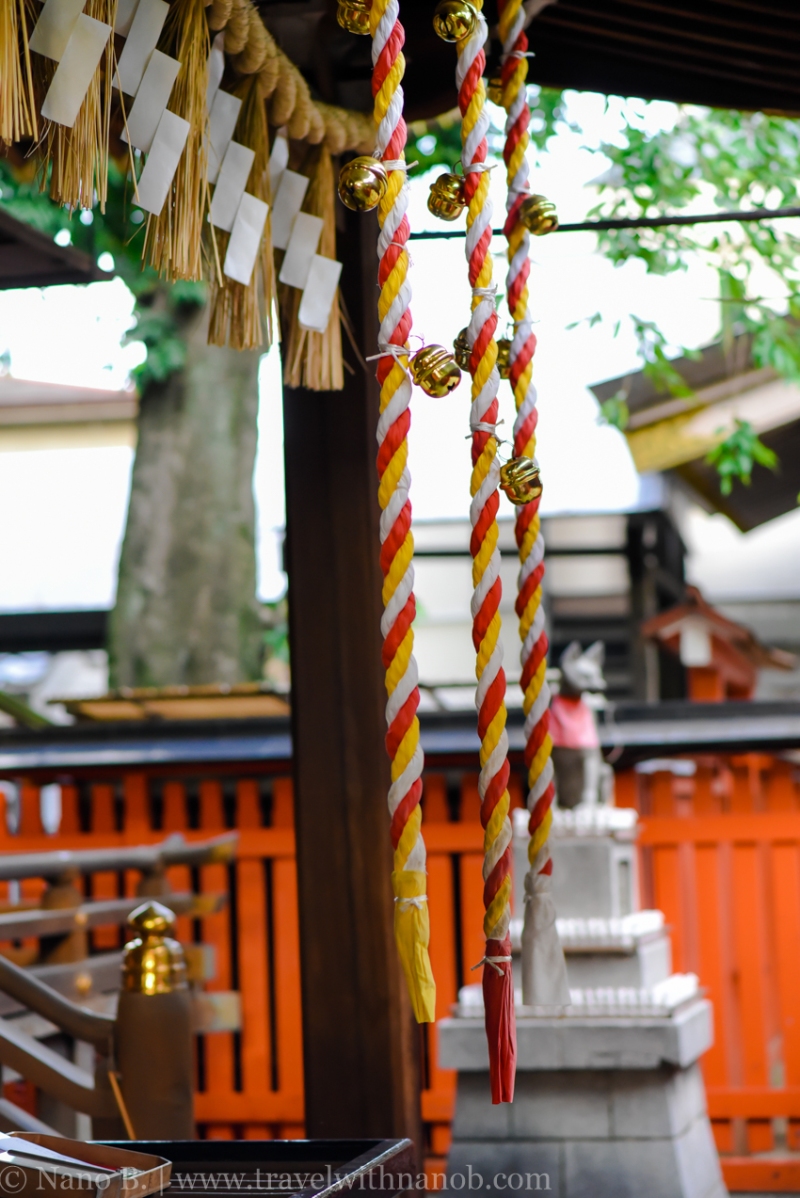 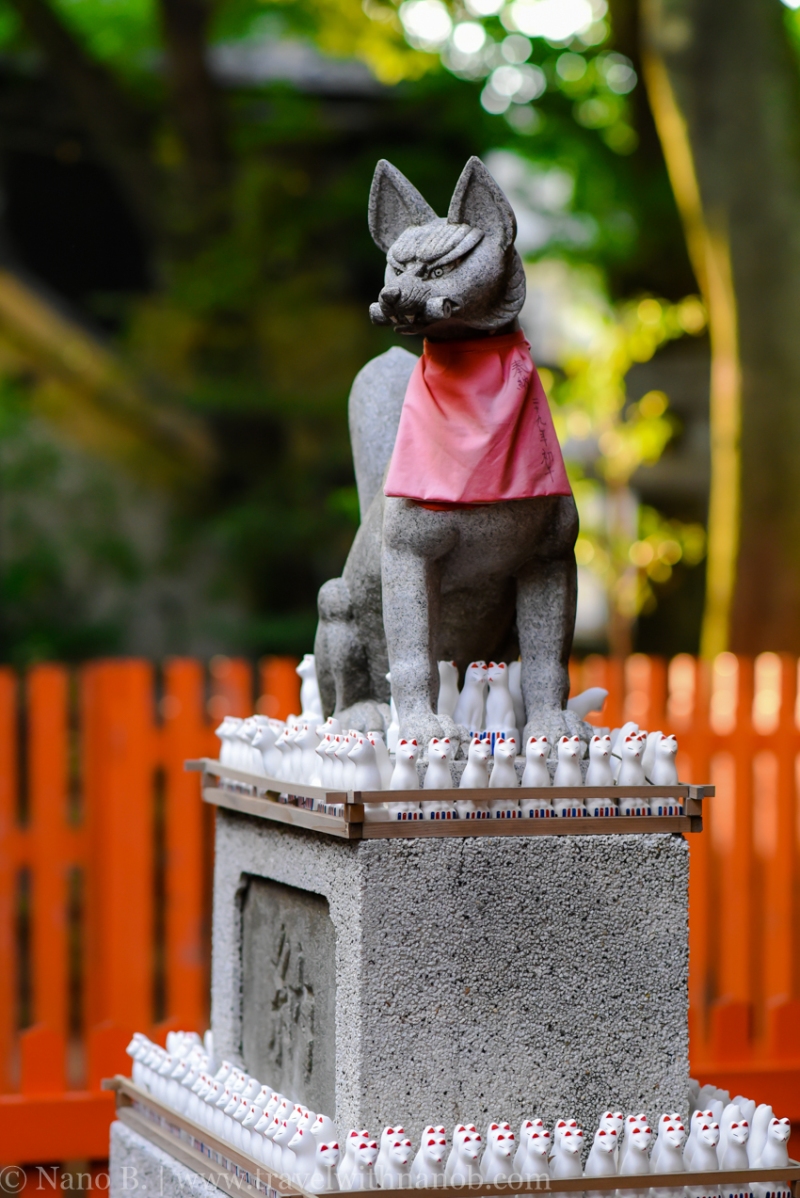 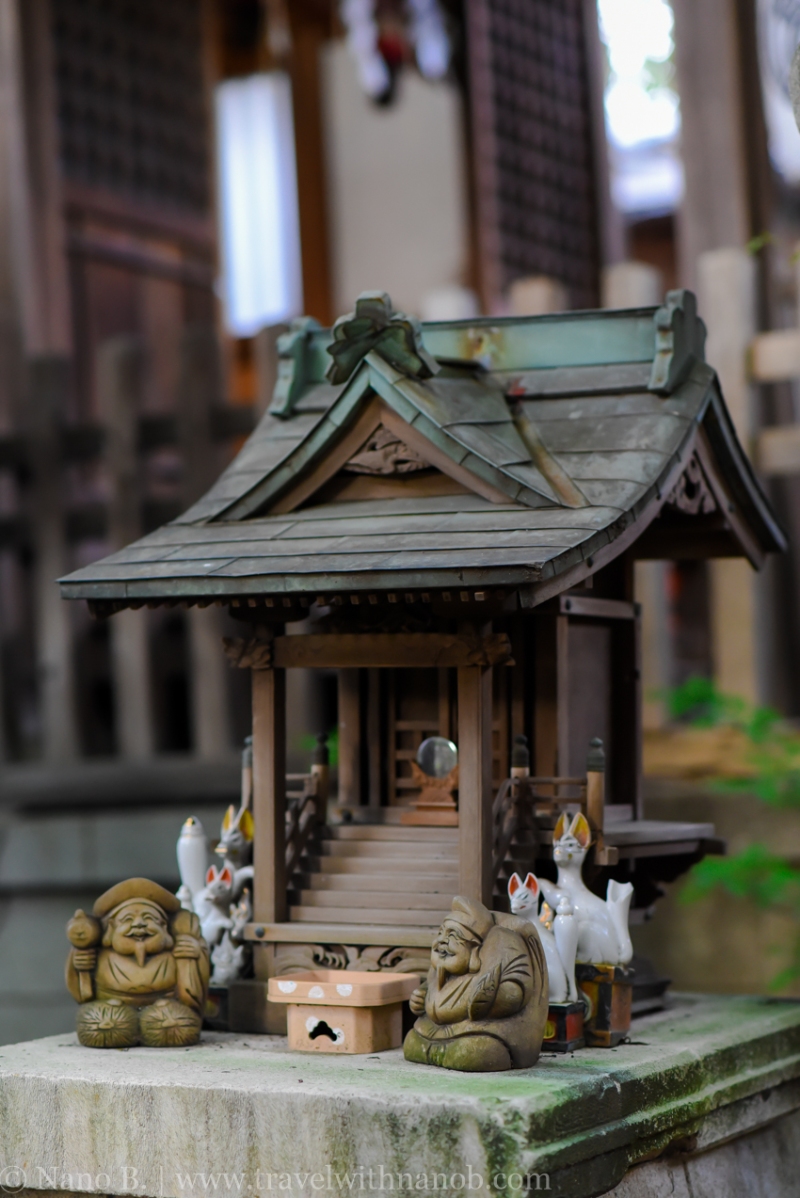 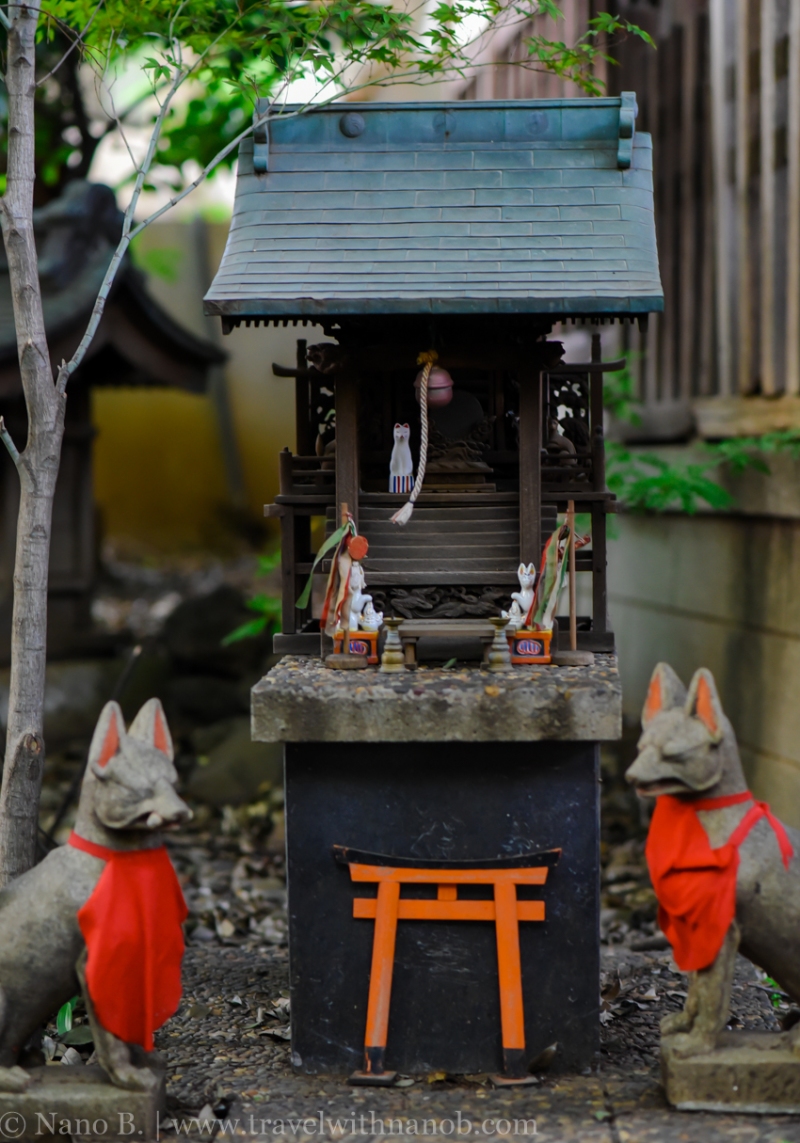 Despite dozens of mosquitoes attacking me from every side (I kid you not, it was the most uncomfortable photo session I’ve ever had!), I couldn’t stop photographing the beautiful details of the shrine. I also spotted a weeping cherry and plum trees, as well as numerous maple trees, which means it will be stunning during spring and fall, and could serve as a wonderful backdrop for a portrait photo-shoot. I guess multiple return trips are in order.